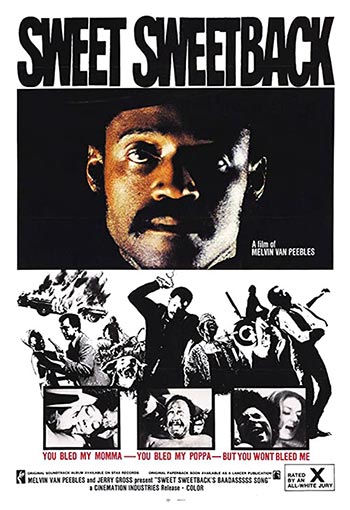 Melvin Van Peebles wrote, directed, produced, edited, composed and starred in this powerful and inflammatory attack on White America. After the body of a black man is discovered, Sweetback helps two white ‘acquaintances’ in the police force to look good by agreeing to go with them to the station as a suspect. But he is forced to go on the run after brutally attacking the two policemen when they arrest and beat up a young black man.

Sweet Sweetback’s Baad Asssss Song (1971) was a independent marvel from Melvin Van Peebles. It also influenced the so called black exploitation movement of the seventies. According to Mr. Peebles, after the surprise success of this film, the producers of SHAFT changed his character into a black man. Even beyond Hollywood, Mr. Peebles still has some creative control. Before he made this film and the small success of WATERMELON MAN, several Hollywood Studios wanted him to be a Black expert. They wanted him to doctor some scripts and make them “black” (the term he used can be found in his back about the making and selling of Sweet Sweetback’s Baad Asssss Song (1971). This book is cool, it also has a lot of vital information, a script to the movie and a copy of the soundtrack.

Mr. Van Peebles used a lot of French new wave style of film making when he shot this movie. The many unique editing and camera angles can be found scattered throughout the movie. He also composed the brilliant soundtrack which also comes across as a concept album. You can listen to the movie on record! This movie was more of a statement to the White Establishment. That a black man can make a unique film without the restraints of the studio system and not have to answer to investors and anxious producers.