The Beast and the Magic Sword (1983) Paul Naschy 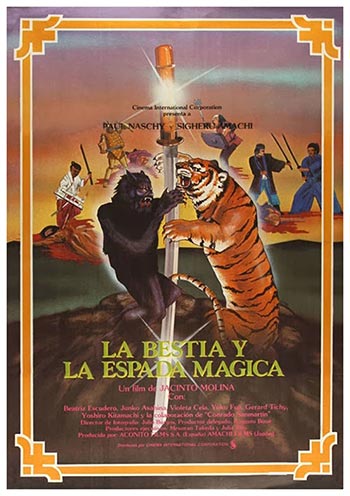 Japanese werewolf movie, with Spanish cult legend Paul Naschy, cross-blending his ongoing Waldemar Daninsky werewolf mythology, with Japanese scenery, and alleged legends. Naschy remains the most barrel-chested werewolf in cinema history, and continues his ongoing tributes to the Lon Chaney Jr.film that started it all, “The Wolf Man”. A fun, gory, little film, that is worth seeing.

Filmed at Toshiro Mifune’s Tokyo studios, this is the best Spanish fantasy adventure ever filmed, made on a fairly lavish budget and with a good deal of imagination. Waldemar goes from medieval Middle Europe to Renaissance Spain and from there to the Japan of the Shoguns. A fascinating rites passage scenario combining the iconography of Arthurian legend with the most revealing aspects of traditional Japanese lore. La bestia y la espada mágica is a Katasongawa Showsko drawing brought to life as a backdrop for a werewolf story.