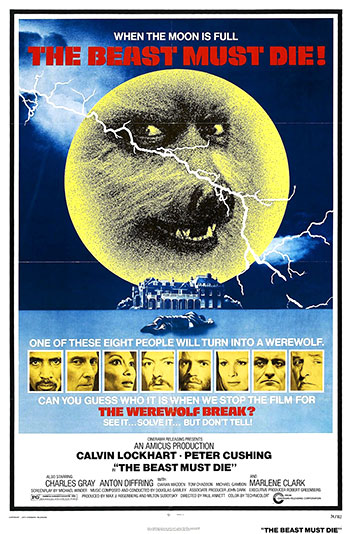 Tom Newcliffe, a rich businessman and expert hunter summons six guests to his huge country estate which he has rigged up with video cameras and a high-tech security system. He tells them and his surprised wife that they are all to stay over a weekend and that all of them will be kept on the estate during that weekend. For each guest, dead bodies have followed in their wake and the way that the dead have been murdered means that one of the guest is a werewolf and Tom has summoned his guests here to discover who it is and to hunt it down… The film has a clip at the beginning asking people in the audience to try to identify the werewolf and near the end there is a 30-second “Werewolf Break” for the audience to think over the evidence…

Briskly directed with considerable flair and style by Paul Annett, with a clever script by Michael Winder, a divinely soulful 70’s funk score complete with groovy wah-wah guitars and hip’n’heavenly horns by Douglas Gamley, sharp, slick cinematography by Jack Hildyard, an incredibly hysterical “werewolf break” that’s narrated by some plummy-voiced guy, and lively acting from a game ensemble cast, this baby rates as a crafty, offbeat and exciting fright feature lycanthrope variant on Agatha Christie’s “Ten Little Indians.” My sole complaint is that the werewolf alas is pretty unconvincing and disappointing; it’s obviously just a large furry made-up dog. That quibble aside, this picture still provides a great deal of immensely entertaining fun.