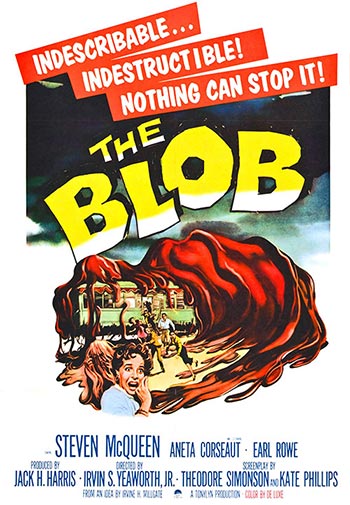 A mysterious creature from another planet, resembling a giant blob of jelly, lands on earth. The people of a nearby small town refuse to listen to some teenagers who have witnessed the blob’s destructive power. In the meantime, the blob just keeps on getting bigger.

This short budget film contains noisy action, suspense, grisly murders and emotion. This flick provides great load of screams, terror, creepy atmosphere which becomes pretty sinister with the mound of glop appearing. It’s a sleek production with genuine thrills, tension, chills and regular special effects, making an exciting slimy jello invader and frightening and horrifying to the audience by that time . This moving movie packs astonishing scenes as when the large blob exploding through the theater screen(meanwhile the spectators are seeing a film starred by Bela Lugosi, the mark of the vampire) and people stampede from cinema, furthermore when the Thing invades the Downing Town Diner among others. The film packs an atmospheric cinematography with ominous camera angles, colorful atmospheres and moody woods.