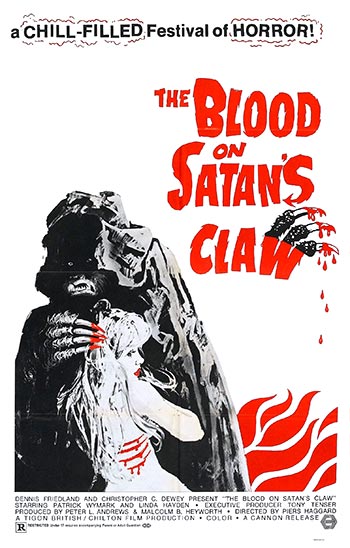 Horror thriller set in 17th century England about the children of a village slowly converting into a coven of devil worshipers.

Quite simply, ‘Blood On Satan’s Claw’ is the finest horror film produced in Britain in the Seventies. Haunting, horrific and hopelessly compelling it deserves far greater recognition than it currently warrants. Linda Hayden, the most talented actress working in British exploitation films at the time, delivers her finest performance in the film, and it is one light years ahead of the standard in the genre. Patrick Wymark, in his last film role, is also excellent, and music, direction and art direction are all of an exceptionally high standard. Interestingly, the film was shot as ‘The Devil’s Touch’, and originally released late in 1970 as ‘Satan’s Skin’. For some reason business wasn’t too good and it was rereleased the following year on a more succesful double bill with ‘The Beast In The Cellar’. Don’t miss it!