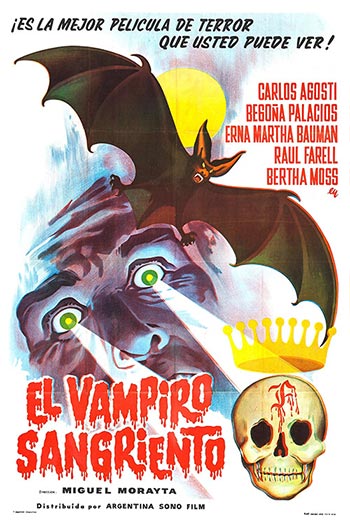 This is the first movie in a two-part series about the vampire Count von Frankenhausen, which concludes with La Invasión de los Vampiros (The Invasion of the Vampires). In this entry, the vampire hunter Count Cagliostro has invented a device to rid the world of vampirism. His daughter goes undercover as a spy in the mansion of her father’s mortal enemy Count von Frankenhausen, and uncovers a nightmarish world of horror there.

This is a beautifully produced movie that takes some of its visual ideas from the Italian film La Maschera del Demonio (Black Sunday). The cast is likewise wonderful, especially Spanish actor Carlos Agostí as the vampire count, with able support from Argentinian actress Bertha Moss as his evil servant and the lovely Begoña Palacios, who a few years after this movie was made married the American director Sam Peckinpah.