The Body Beneath (1970) Andy Milligan 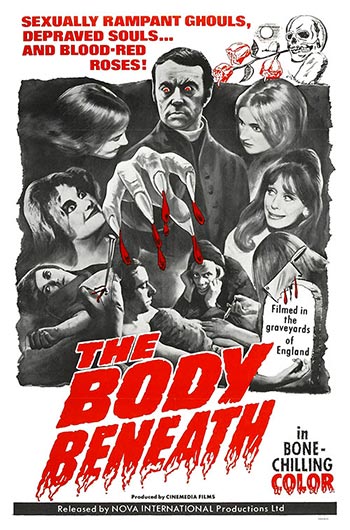 Reverend Alexander Algernon Ford returns to England to reopen the Old Souls Church near Carfax Abbey. But, Reverend Ford turns out to be a vampire disguising himself as a minister. With the help of three green faced ghouls and a hunchback assistant, named Spool, Reverned Ford begins to make some plans for the descendants of the Ford family. Reverend Ford gives the vampire bite to his granddaughter Anna Ford and he makes Anna drug her husband Graham Ford so the green faced ghouls can suck his blood. Reverend Ford’s cousin, Susan, is taken captive used as a breeder for vampire babies, while his quiet wife, Candace, is used as a private blood bank. Trouble starts when Susan’s boyfriend Paul tries to set her free which leads to more complicated matters for Reverend Ford.