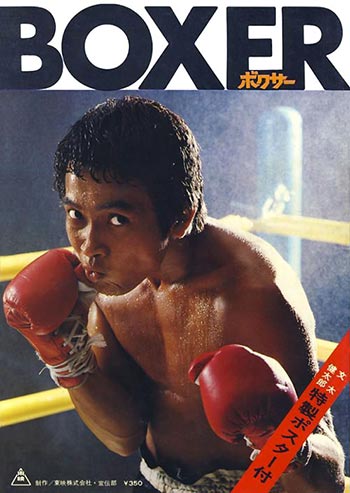 In the midst of a match, a successful boxer – Hayato, has had enough of the sport. He lets himself get knocked, quits boxing, leaving his wife and start living alone with his mangy dog. One day a young mediocre boxer knocks at the door and wants to be Hayatos apprentice.

Director Shuji Terayama was an established figure in sports commentaries and therefore was able to reach the members of the public who weren’t into art. He became known as a commentator on boxing and horse racing, and in fact, was himself an avid boxer, thinking that by training he’d learn more about life.

His 1977 movie The Boxer, obviously inspired by the American blockbuster Rocky released one year prior, is the most “normal” of his films. The story is a rudimentary underdog tale and is played out mostly straightforward. That doesn’t stop Terayama from injecting some of his trademark artsy touches here and there, which just makes this film more interesting and unique.

The soundtrack is excellent and the setting is very interesting. Even though the story is set in a deteriorating industrial town, Terayama is able to find some beauty into it, introducing some wonderful surreal locations, quirky characters and kick-ass training montages. This time, the color filters are limited to a single location (a bar), and some shots are just breathtaking, like the one of the girl in red next to a phone booth on the sea shore. Excellent film, very underrated and under- seen.