The Ceiling at Utsunomiya (1956) Nobuo Nakagawa 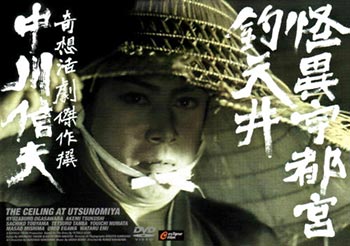 Around a perfunctory premise of a rich merchant wishing to marry a kind-hearted young woman against her and her boyfriend’s will, a plot is spun of betrayal in the highest levels of the Tokugawa shogunate. The wandering ronin Ryutaro finds himself in the middle and chooses the girl’s side, pitting himself against the merchant’s minions, a band of loud-mouthed yakuza and a mysterious samurai who hides his face beneath a hood and wields his sword with only one hand – using the other to nervously twirl a pair of walnuts.

The actual machinations of the plot against shogun Iemitsu that is at the heart of the proceedings remain unclear until the very end, though the title is a big clue. Nakagawa leaves the audience in the blind, drawing them into Ryutaro’s investigation. He peppers the goings-on with ambivalent and off-beat characters and striking locations. Tanba’s hooded, walnut-twirling samurai makes for a very peculiar villain and the actor succeeds in making the character’s potentially silly nervous tic seem eerily sinister. When the hood finally comes off, the film takes a sharp turn into horror territory that announces the shape of things to come for Nakagawa.