The Color of Pomegranates (1969) Sergei Parajanov 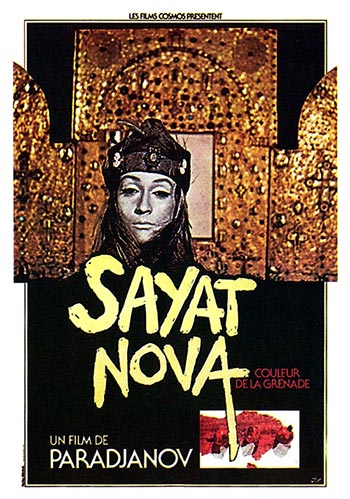 One of the greatest masterpieces of the 20th century, Sergei Parajanov’s “Color of the Pomegranate,” a biography of the Armenian troubadour Sayat Nova (King of Song) reveals the poet’s life more through his poetry than a conventional narration of important events in Sayat Nova’s life. We see the poet grow up, fall in love, enter a monastery and die, but these incidents are depicted in the context of what are images from Sergei Parajanov’s imagination and Sayat Nova’s poems, poems that are seen and rarely heard. Sofiko Chiaureli plays 6 roles, both male and female, and Sergei Parajanov writes, directs, edits, choreographs, works on costumes, design and decor and virtually every aspect of this revolutionary work void of any dialog or camera movement.