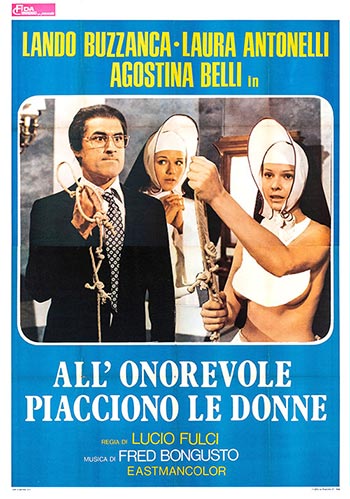 Senator Pupis feels a strong and uncontrollable urge to grab women’s bottoms, a habit than can lead to embarrassment, especially if the woman in question is head of another state and the occasion a state visit. In his desperation Pupis turns to the clergy for spiritual and psychological help.

Lucio Fulci is best known for his “over the top” super gory horror Flicks: Zombie, City Of The Living Dead, The Beyond etc. This on the other hand is a full-blown comedy about a senator with a compulsive Fetish for female “buttock’s”. Someone will have to cure him before he creates a national scandal, so where else to go than a monastery! The film is totally insane and as funny as it can be. It’s great to see films that doesn’t say, “Far enough, we might offend someone”. Because this movie is peppered with “let’s go a bit further, and even further than that, isn’t it cool to offend someone?”. The film is visually beautiful as well, and Fulci’s famous style is very visible. The use of hand held camera, P.O.W shots and extreme close up’s is used to great effect to enhance the comedic effect. Very similar to his horror style. If you’re a fan of Fulci, this is a must see!