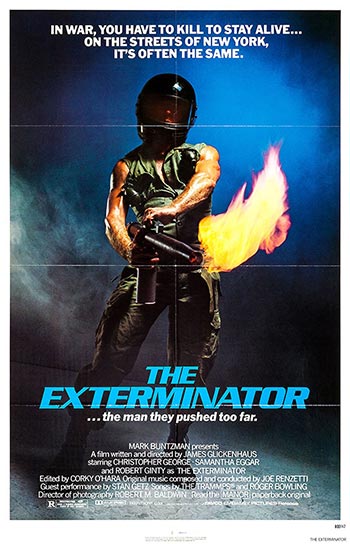 When John Eastland’s best friend, Michael Jefferson, is mugged and left permanently crippled, he decides to do something about it. Jefferson had saved Eastland’s life in Vietnam and now it’s time for Eastland to get revenge for his friend. Using his old Army gear he sets out on a crusade to clean up the streets of New York using the name “The Exterminator.”

“The Exterminator” is a one hell of a vigilante thriller. This legendary flick obviously influenced by Micheal Winner’s “Death Wish” has Robert Ginty as a Vietnam vet, whose friend is badly injured by street gangs. James Glickenhaus (“Suicide Cult”, “The Soldier”) creates an ultra gritty atmosphere of wonderfully seedy New York. “The Exterminator” is extremely brutal: the double murder in the whorehouse really stands out-you can see a half naked fat guy getting shot in the kidney at point blank range with a pistol loaded with poison bullets. Grisly and unforgettable! Add also one of the most brutal decapitations ever captured to film and you have a winner. All in all, an unforgettable experience.