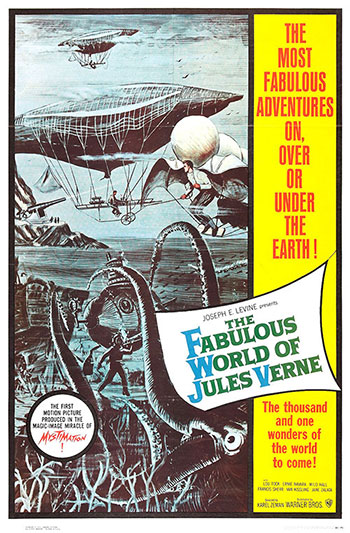 An evil millionaire named Artigas plans to use a super-explosive device to conquer the world from his headquarters inside an enormous volcano.

Truly unique and stunning film of Jules Verne’s “For The Flag” by the Czech master director Karel Zeman.Although the story is enacted in a rather understated late Victorian style, the visuals are a knockout. Zeman uses animation, graphics, painted sets, model animation combined with live action to create the atmosphere of Verne that the reader associates in his mind. The style resembles the steel engravings of Dore and Bennet and Riou that illustrated these stories with a healthy dose of Georges Melies added.

Photographed in beautiful black and white the animation is of the highest order and not of a Saturday morning variety. There are underwater sequences where the fishes swimming about are so accurately drawn they can be used in a field guide. There are images of ships, submarines, flying craft, castles,and machinery that are drawn in such accurate detail that one must have a freeze frame on his VCR or DVD to pause the scene and study the remarkable detail that went into this production. The late Victorian atmosphere is designed to look like this world that never was and delight us in the magic of science that made Verne the great father of the genre.

If this is not enough, there also is the film score that probably is one of the best ever created for a fantasy or sci-fi film. Truly a forgotten classic, this one is worth hunting down. And remember- this was done decades before CGI or computer animation. Kudos to the great artists who obviously put their heart into it. It shows. Jules Verne himself would be proud of this movie. A film that deserves to be better known, but those who have seen it love it-and treasure it. An outstanding achievement , this remarkable film just gets better every time you watch it. A true cinematic work of art from a visionary director.

The Fabulous World of Jules Verne (1958)