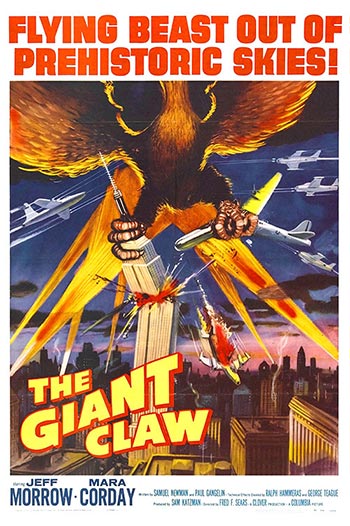 When electronics engineer Mitch MacAfee spots a UFO as “big as a battleship,” from his plane, the Air Force scrambles planes to investigate. However, nothing shows up on radar, and one of the jets is lost during the action. MacAfee is regarded as a dangerous crackpot until other incidents and disappearances convince the authorities that the threat is real. Some believe it is a French-Canadian folk legend come to life, but it turns out to be an extraterrestrial giant bird composed of anti-matter whose disregard for human life and architecture threatens the world.

From the has-to-be-seen-to-be-believed school. A giant bird from space descends on earth, snatching up entire trains, hot rodding teenagers, and overacting bit players. Toss in terrible effects, hammy acting and science of the Ed Wood school and you have a surefire winner for any bad film fest. Then there is the bird itself, which comes complete with flareing nostrils…….