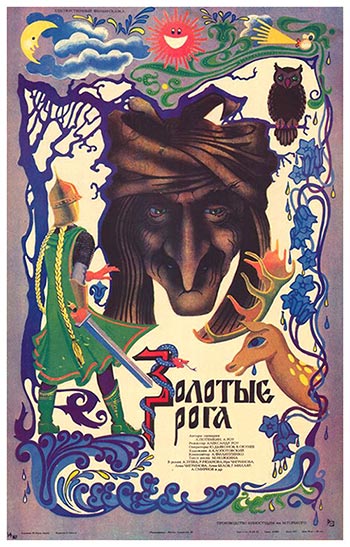 A long time ago a splendid deer with golden antlers lived in the woods, always protecting the poor and weak and disdaining evil. In a little village nearby the woods widow Yevdokya lived with her twin daughters Mashenka and Dashenka, her son and her old father. One day the girls observe robbers hunting the deer. Shortly after they are lured into the woods by forest spirits. Infuriated about their presence, witch Baba Yaga turns them into fawns. Meanwhile, Yevdokya searches for her daughters. For protecting the deer of robbers she gets a magical ring to protect her from danger. The deer advises her to set off to the red sun or the clear moon. But both cannot reach the magic woods with their light. Finally, the boy accompanied by his cat goes in search for sisters and mother.