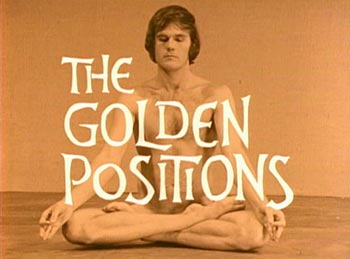 James Broughtons The Golden Positions is a meditation on and catalog of the human body in all its positions and activities. The actors, mostly naked, are filmed (largely in sepia) in short sequences against a completely neutral backdrop (from a fixed camera position) with a voice over narration by Broughton, whose comments are echoed in a musical/choral composition. The actorsmen and women, lying, seated, alone, in couples, embracing, dancing, doing gymnasticssometimes move and sometimes remain stationary.