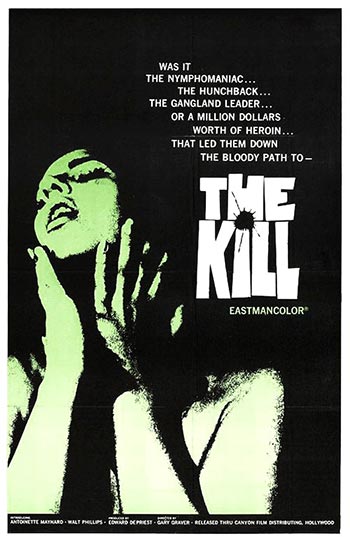 After being brutally raped by a gang of heroin smugglers, Antoinette Malone goes to the nearest private detective she can find in the phone book. He is Charlie Apple, broke and alone, living in his office. Antoinette explains that her brother is involved with the gang and that she has been trying to persuade him to get out. The gang retaliated by raping her and leaving her in an abandoned warehouse. Charlies job: find Mickey, tell him what happened and convince him to quit peddling dope. Charlie takes the case, but not before Antoinette gives him a hundred dollar retainer and seduces him.

Charlie goes to Mickey’s pad only to discover a beautiful blonde on his bed with her throat slit. Mickey bursts in and the two men fight until Charlie is knocked out. Mickey phones the mob and they come over and drag Charlie back to the warehouse and tie him up. Coming to in the warehouse Charlie struggles to the phone and calls Antoinette to hurry over and rescue him.

When Antoinette arrives she attempts to make love to Charlie but is interrupted by the gang returning. They barely get out of the warehouse before the gang sees them and takes off in hot pursuit. A mad chase begins through the city streets and alleys climaxing with the gang overtaking Charlie and Antoinette in a deserted gravel pit.

Antoinette is kidnapped and one of the mob stays behind to slug it out with Charlie. Charlie knocks him out and takes off.

Gang boss, Kruger, phones Mickey and instructs him to get rid of Charlie Apple. Mickey, in bed with his new girl Candy, says he first has to make a pick up at the beach of one million dollars worth of heroin. Kruger says he will meet Mickey there with the money. Mickey sends Candy to Charlie’s office to get any and all information on him.

Charlie arrives at his office to find Candy going through his desk. At the gangs office Antoinette is forced into a degrading situation with a lesbian.

Charlie wins Candy’s confidence by making love to her and she tells him about the pickup and that the gang has Antoinette with them.

On a deserted beach where everyone goes to pick up a million dollars worth of heroin there is a bizarre and unusual showdown.