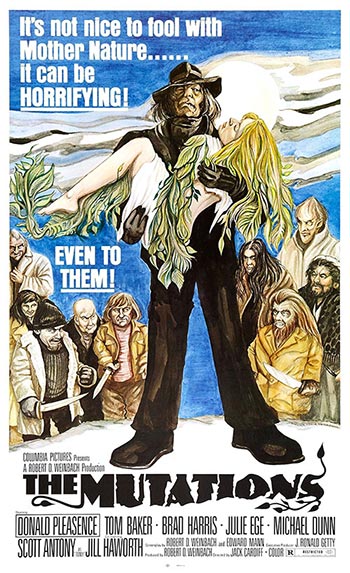 Students have been going missing from the local college, and the one person who knows what’s happened to them is Dr. Noller, a rogue biologist. Not satisfied with the pace of natural selection in driving evolution, Noller wants to push things further by creating his own genetically engineered creations. Having already created some amazing specimins by mixing the DNA of plants and animals, the doctor has now set his sights higher, and want to work on modifying humans, as well.

“Mutations” owes a lot to Tod Browning’s “Freaks” but offers loads more: some nice 70’s nudity; plants that eat live rabbits (why not pet food?); dialogue that mentions “cloning dinosaurs”; a soundtrack that judders from spaced-out, slowed-down, phased bass to free form jazz. This is a minestrone of madness with some nice inconsitencies in the plot. Great!