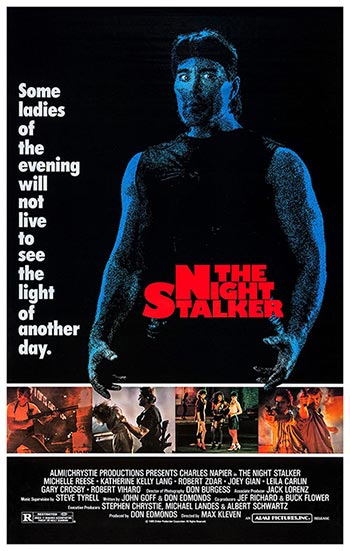 It’s night in the city. The office workers and shop owners have long since gone home. Now the creatures of the dark emerge. Pimps, prostitutes, drug dealers and street gangs, all staking their territory in the shadows of the night. But among them is a stranger, a diabolical fiend, growing stronger… with every woman he kills.

Gruff detective J.J. Striker (Charles Napier) is assigned to hunt down the bloodthirsty Night Stalker before he can kill again. As Striker doggedly scours the city, armed with a single clue, the trail of brutal murders leads him to a bizarre Asian sector. Here he learns that the killer gains inhuman strength by absorbing the lives of his prey. Striker gets closer, the Night Stalker gets stronger, as each prepares for the inevitable- a savage battle that will leave only one survivor.