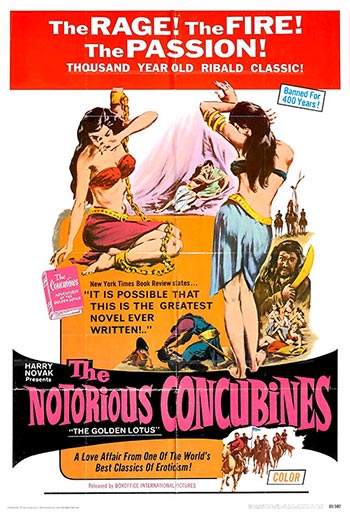 Not satisfied with being a 13th century house-wife, unscrupulous Chin Lien tries to exchange her rice salesman of a husband for his more attractive brother, captain of the guard Wu Sung. Rebuffed, she proceeds to Plan B: Poison her husband and begin a lusty affair with wealthy, decadent Men Ching, played future director Juzo Itami (A Taxing Woman). While Wu Sung goes on a murderous rampage and Chin Lien celebrates by becoming Men Ching’s fifth wife, the lecherous husband marries Wife Number 6 and drowns himself in drunken orgies. As the country descends into anarchy, Wu Sung and his one-time sister-in-law finally meet for a bloody reunion!

Awash in sex, violence, and brutality, this wicked art-house exploitation epic is stylishly directed by Koji Wakamatsu, the controversial director of such Japanese cult hits as Ecstasy of the Angels and Go, Go, Second Time Virgin, with future director Juzo Itami (A Taxing Woman) as the twisted Men Ching.

Dark, cynical Japanese epic brought to U.S. in a dubbed version by shlockmeister Harry Novak. Still, this gory, sexy epic is made with style and interesting for to compare to “Yojimbo” and other masterworks of the form.