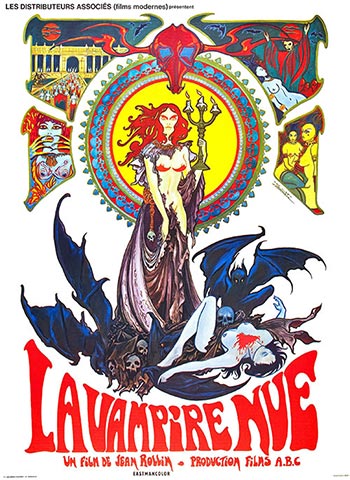 Wealthy and decadent industrialist Georges Radamante rules over a strange secret suicide cult and wants to achieve immortality by figuring out a way to share the biochemistry of a young mute orphaned vampire woman. Complications ensue when Radamante’s son Pierre finds out what’s going on and falls for the comely lass.

From the title and the opening sequence of ‘La Vampire Nue’ it looks like you’re in for a dreamlike erotic nudie vampire flick ala Jess Franco (which is not a bad thing mind you!). Very quickly though it metamorphoses into something more complex, and difficult to categorize. The mysterious and sensual title character played by Caroline Cartier actually has very little to do on screen, but is the key to the mysterious events involving scientists studying immortality, and a surreal suicide cult. A young man discovers his father is somehow involved in a secret society who favour animal masks and (apparent) murder. When he investigates he finds that not everything is as it seems, and that the enigmatic, mute beauty at the centre of it may hold the key to the future of mankind’s evolution. A very strange, poetic and unique piece of 60s exploitation, quite unlike any other.