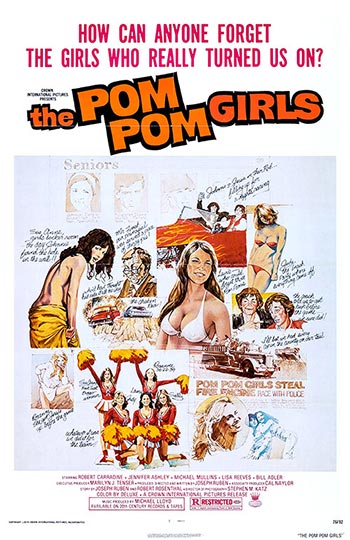 A football player at Rosedale High School is amorous of one of the cheerleaders, who is going with another guy. Another player can’t decide which of two cheerleaders he wants to be with. Meanwhile, the Big Game with Hardin High School is approaching, and a prank war is in full swing.

The Pom Pom Girls is a fairly typical slice of 70s teenage drive-in fodder, full of hot girls and hunky guys whose lives mainly revolve around their cars and who they’re canoodling with in the back seat. It’s clichéd and predictable stuff but achieves a certain lackadaisical charm thanks to an amiable cast and a suitably inconsequential approach to its plot—as the viewer, we have no idea where we’re being taken, but we’re still happy to go along for the ride.