The Raiders of Atlantis (1983) Ruggero Deodato 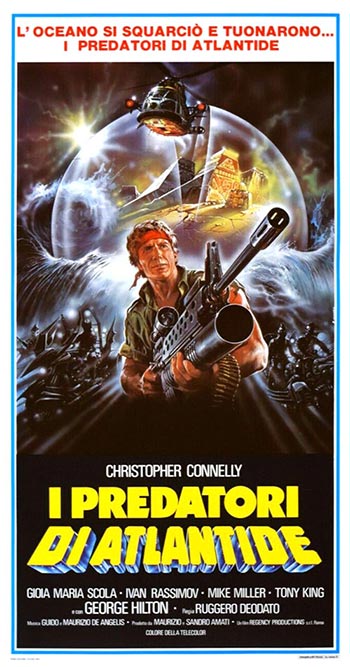 A team of terrorist-fighting Naval officers in the South China Sea finds their struggle against the enemy taking a backseat to the fight of their lives when a horde of creatures thought to be extinct for millions of years descend upon them.

Can you imagine a movie including a Russian submarine, the ancient continent Atlantis, a evil Punk-Rock-Gang trying to capture the world and some Vietnam veterans fighting against them? This is trash at it’s best!

Both Roberto D’Ettorre’s slick cinematography and the spirited funky jamming score by Oliver Onions are up to speed. Best of all, this film is done with a fiercely tight, brutal, and straightforward verve that gets right down to stirring brass tacks and delivers the satisfying loopy goods like nobody’s business. A really fun flick.