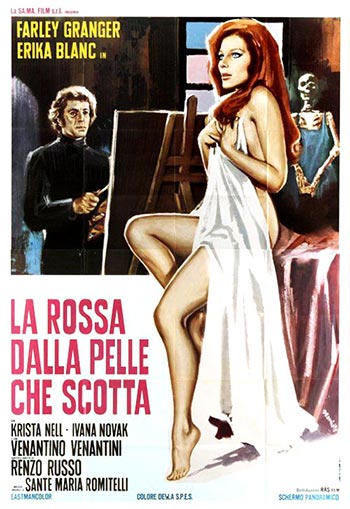 In Istanbul, a bitter, penniless painter (Granger) meets a red headed prostitute who reminds him of a forgotten lover. He then becomes interested in a mannequin discarded by some hippies. The mannequin triggers a memory — or a hallucination — of an irresistibly attractive, mute woman (Erika Blanc). When she finally speaks, the woman talks Granger into using her as a model. Granger’s new nudes become hot sellers. While he’s away in the city, the mysterious redhead enters into casual affairs with a passing hunter and Granger’s chief patron. When Granger objects, she threatens to leave. An uneasy truce is worked out with the miserable Granger watching from afar as his model meets the hunter in the forest, or seduces a young college boy on the beach.

If you are a fan of Eurostarlet Erica Blanc, you will probably enjoy this movie in which Blanc plays a role very similar to the sexy succubus she played in “The Devil’s Nightmare”. Blanc plays an artist’s mannequin come to life who starts out as a mute fantasy figure but soon turns into nightmarish femme fatale who tortures the artist with her increasingly blatant infidelities.