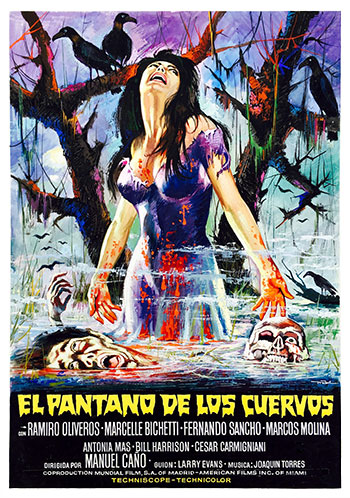 “Swamp Of The Ravens” is a very unusual piece of 1970’s Euro Cult Cinema. It’s story is one that was all all too familiar several decades before this came out. A doctor who has been banished from his hospital for crossing both moral and scientific barriers decides to strike out on his own and continue with his experiments. Except there is no Gothic castle here. Instead his laboratory is located in a shack surrounded by a swamp filled with the doctors used cadavers – which may be why all those ravens are hanging around it. There are some grisly sequences including what looks like a genuine autopsy – not stock footage but instead one which seems to have been performed especially for this film, with the actors present. Add some hazy performances, a couple lepors, and a semi sadistic romance with just a touch of necrophilia – and presto! You have a crowd pleasing 1970’s Euro Sleaze Extravaganza!