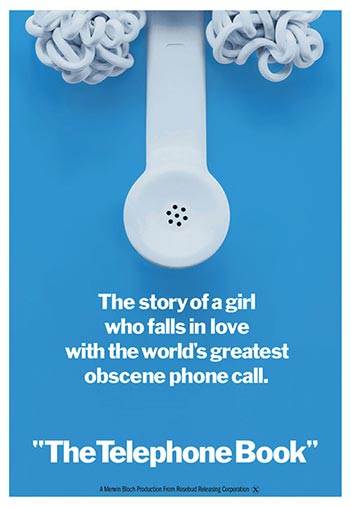 The story of a day in the life of a lonely, sensitive, exhuberent, attractive, young woman. Her exploits, encounters, and frustrations as she attempts to find a “special” someone, a caller who has “class”, as she puts it.

Funny, near brilliant, underground movie about the sexual perversions of everyday people. Centers around Kennedy (who is a shoe in for a young Goldie Hawn) and her various experiences trying to find John Smith the greatest obscene phone caller she’s ever heard. Problem is it’s New York City, which leads her to a lot of wrong Smiths. The ‘real’ John Smith is played by actor Norman Rose who’s deep resonate, ‘newsman’ voice (he’s worked as a narrator on many other features) only adds to the hilarity as he explains in great detail how he came to be the ‘greatest obscene phone caller of all time’. This is interspread by ‘true life’ confessions of former obscene phone callers that are so twisted you’ll just have to laugh. Also has a wild,’far out’ animated sequence that could easily fit into a Marilyn Manson video. Much more provacative than today’s hardcore adult films, which tend to be very mechanical.

A truly unique film viewing experience that is similar to the much herald PUTNEY SWOPE, but is more consistently funnier and imaginative. A terrific example of ‘grass roots’ filmmaking were the creativity and ingenuity of the director makes todays $200 million, special effects laden blockbusters look as stale as yesterday’s lunch. Most amazing scene features actor Barry Morse (Lt Griggs of the old FUGITIVE TV series) having over ten naked women lay on top of him at the same time!!