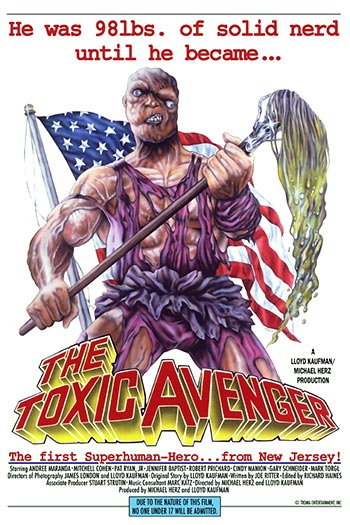 This is the story of Melvin, the Tromaville Health Club mop boy, who inadvertently and naively trusts the hedonistic, contemptuous and vain health club members, to the point of accidentally ending up in a vat of toxic waste. The devastating results then have a transmogrification effect, his alter ego is released, and the Toxic Avenger is born, to deadly and comical results. The local mop boy is now the local Superhero, the saviour of corruption, thuggish bullies and indifference. Troma classic with good make-up effects and stunts, a pleasant surprise indeed.

A brilliantly hilarious, entertaining and gory as hell horror comedy that became Troma’s landmark film and made the studio the popular cult independent studio that it is today. Yes the acting is laughable and the film gets a little cheesy, but this is pure escapism at it’s best! The film was originally given an “X” rating for it’s extreme violence and gore such numerous head crushing and brutality. But the movie went on to become one of the greatest cult movies of all time, this is definitely a movie for those with a strong stomach and warped sense of humor. A must see!