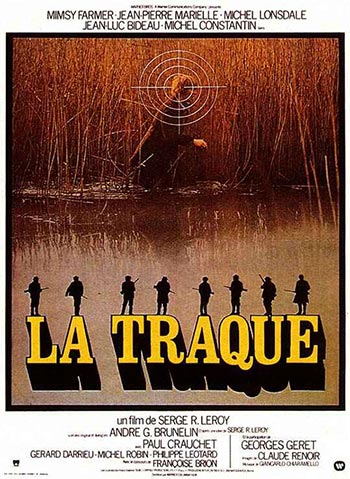 Among a small group of hunters, a pair of brothers coincidentally meet a young women deep in the woods and rape her. A chain of events will lead the whole group to side against the victim and hunt her down to silence her.

The movie does shine even at this first level of narration. The hunting is brilliantly filmed, the tension builds up as members of the hunting party ensnare themselves in a spiral of violence and inhumanity.

However, the second level is even more interesting. It manages to etch a kind of clinical still image of a certain rural upper class. Each member is an icon of a social status and human behavior: the gross local industrial manager, greedy rural landlord, retired army captain with a warped sense of comradeship acquired during the war in Algeria, ambitious young local politician willing to sacrifice a human being for the sake of his reputation…

The straightforward, brutal plot allows to picture the subtle, convoluted mechanisms of collusion between all these icons of local power: money, influence, love affairs and class solidarity to evade the consequences of various breaches of the common law.

The brilliant cast manages to flesh out these individuals vividly but not without subtlety. Although the clothes, haircuts or cars look dated now, the timeless theme of this movie has not aged a day after thirty years.