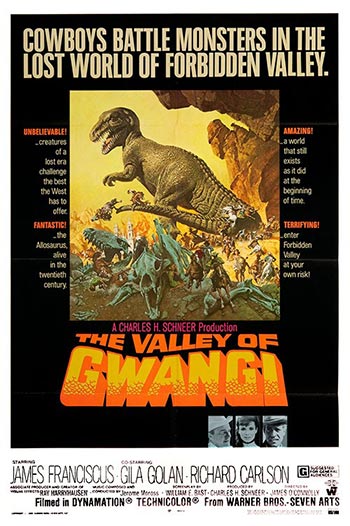 Cowboy James Franciscus seeks fame and fortune by capturing a Tyrannosaurus Rex living in the Forbidden Valley and putting it in a Mexican circus. His victim, called the Gwangi, turns out to have an aversion to being shown in public. Another film featuring the stop-action special effects talents of Ray Harryhausen.

One of Ray Harryhausen’s most famous films, The Valley of Gwangi is an all-time dinosaur classic that has inspired future dinosaur films such as “Jurassic Park.” It really pushed Ray to make the interactions between the cowboys and the prehistoric beasts convincing, which for the most part he was successful.

The story was originally created by Ray’s mentor Willis O’Brien (who did the effects for King Kong), who couldn’t make it after writing the original script, so it’s only fitting that his successor would finish it for him. And boy did he finish it well. This movie has all the spectacle of a true sci-fi action/adventure film. The action scenes are great and the music is wonderful and fits perfectly with the tone of the film. Many creature scenes that were done by Ray are fantastic, such as the roping of Gwangi and Gwangi’s battle with a styracosaur, all done seamlessly.