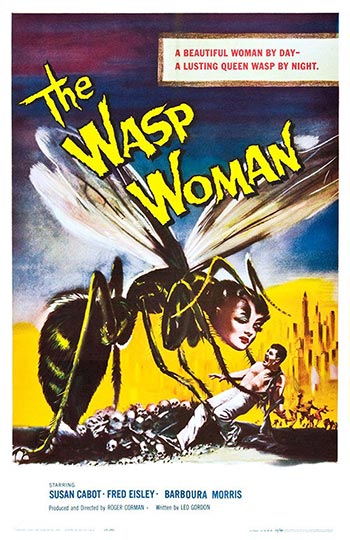 THE WASP WOMAN A Beautiful Woman by Day—A Lusting Queen Wasp by Night! Roger Corman, king of the cult classics, produced and directed this low-budget fear-fest, and even makes an uncredited cameo appearance as a doctor in one of the hospital scenes. Susan Cabot (Sorority Girl) plays Janice Starlin, whose cosmetics company has started to lose sales, because its marketing relies on her own once-impressive but now aging beauty. The eccentric Eric Zinthrop (Michael Mark) develops an enzyme extract from royal wasp jelly, which rejuvenates Janice, with one tiny little side effect: it turns her into a monster! Written by frequent Corman collaborator Leo Gordon (The Terror), this co-stars Anthony (aka Fred) Eisley (Dracula Vs. Frankenstein) and Barboura Morris (A Bucket of Blood).