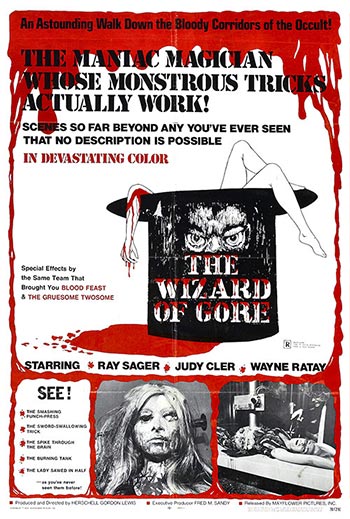 A magician performs a show where he selects a female volunteer and appears to put swords, drills, and such through them. They walk away and everyone applauds, then they show up somewhere else, dead of the same injuries they sustained in the magic show. Police are baffled and can’t tie the murders to the magician. A man whose girlfriend is infatuated with the show begins to investigate on his own.

“The Wizard of Gore” is one of the legendary H.G. Lewis’s goriest films. Its also one of his most interesting, as the plotting is rather ambitious, touching upon concepts such as hypnotism, meta-fiction, and illusions. Despite none of these themes being explored with anything resembling subtlety, its certainly an adventurous move for Lewis. To his credit, the ending is unforgettably bizarre. It also makes this one of his most surreal efforts.