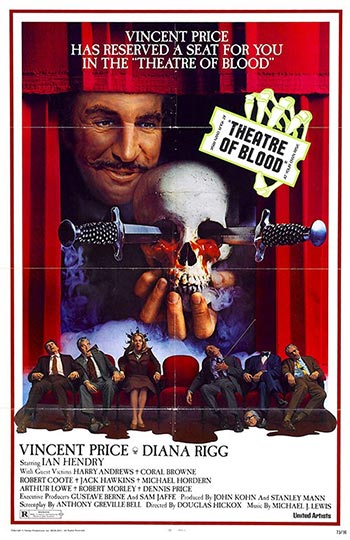 Edward Lionheart (Vincent Price) stars as an actor overlooked for a critics’ acting award, despite producing a season of Shakespeare plays. After confronting the Critics’ Circle, an attempted suicidal dive into the Thames results in Lionheart being rescued by your typical paraffin/meths/turps swigging tramps. Lionheart then (presumed dead) exacts his grizzly, and quite amusing revenge on the critics who denied him his finest hour.

A Tour de Force for Vincent Price in Theatre of Blood! Price plays a gothic Shakespearean actor who begins to slay all of the critics responsible for not giving him the best actor honours for the year. Price kills each in the style and spirit of a Shakespeare play. Each is killed with a generous dose of witty, dark black humour. The whole cast is superb as is the writing. A special treat is the performance of Robert Morley as a motherly critic forced to eat his doggies(babies) baked in a pie ala Titus Andronicus. A must see for Price fans.