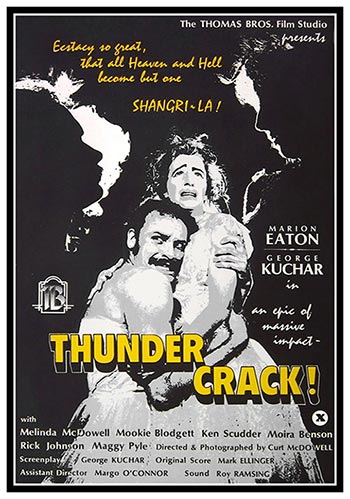 Take a cliched Horror-story beginning, a remote Gothic mansion, an insane hostess, a group of strangers (four men, three women and a gorilla) and you pretty much begin to see that this is not meant to be a serious film, but rather a parody of several other (older and better) ones. Social and sexual confusion & misunderstanding guarantees that this odd cast of characters will come together and entertain & amuse for 139 minutes.

This celebrated oddity of underground art/porno filmmaking is at once a hysterical, insane, and strangely literate comedy. Director Curt McDowell makes good use of the great interiors and black-and-white format to lend an air of sleazy sophistication to the proceedings. As for the sex, it’s too demented — too lost among the chaotic proceedings — to categorize this as just another “Golden Age” porno; the inclusion of a gay male scene only underscores that. Definitely one of the oddest cult films of its decade, perhaps of any decade. Students of the ultra-weird (who aren’t put off by explicit sex) shouldn’t miss the opportunity to see this.