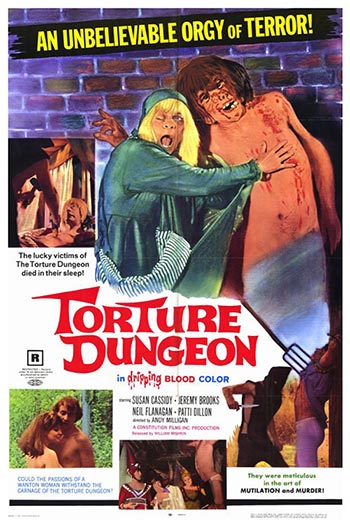 The sudden decapitation of Lord Harkin has the Kingdom, as well it should, in a state of fear. For it is well known to one and all of the citizens around and about that Norman, the evil Duke of Norwich (played by who cares) and his buddies, bimbos and cohorts over at—Drum Roll—The Torture Dungeon are responsible. Norman has plans to marry off his dimwit half-brother Albert of Aberthy to Heather McGregor of No Title, the most beautiful and sensual girl in the Kingdom. But first he has to arrange for the pitchforking of her current squeeze, William the Nobody. Heather has no idea of what she is getting into but, following the spectacular Royal Wedding followed by the erotic ceremony of the spectacular consumation of the Royal Marriage, she begins to suspect that all that is rotten does not lie entirely in Denmark, especially if Andy Milligan is around. Norman’S half sisters—this guy has no full siblings—Lady Agatha and Lady Jane, in a very good effort to warn Heather of Norman’s…