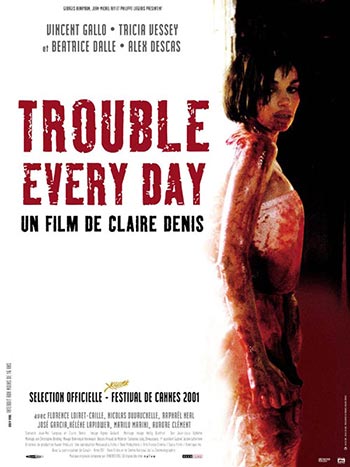 Shane and June Brown are an American couple honeymooning in Paris in an effort to nurture their new life together, a life complicated by Shane’s mysterious and frequent visits to a medical clinic where cutting edge studies of the human libido are undertaken. When Shane seeks out a self-exiled expert in the field, he happens upon the doctor’s wife, another victim of the same malady. She has become so dangerous and emotionally paralyzed by the condition that her husband imprisons her by day in their home. It is Shane’s chance encounter with this woman that triggers an event so cataclysmic and shocking it might just lead him to rediscover the tranquility he seeks to restore for himself and his new bride.

Trouble Every Day generated a certain amount of controversy in its screenings at the 2001 Cannes Film Festival, where a number of patrons walked out in disgust at the film’s intense blend of sensuality and cannibalism.