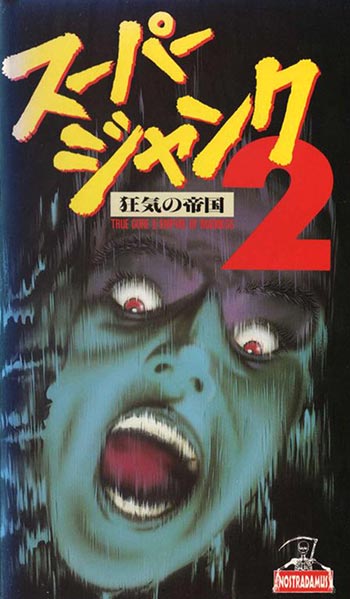 Don’t be misled by the title and put your lube away: True Gore II (aka Empire of Madness) (1989)–M Dixon Causey’s follow-up to the eponymous first entry–has virtually no true gore in it at all. Instead, the first half is a compilation of faux-snuff vignettes akin to something you’d find in a SOV horror collection like Snuff Perversions 1 & 2, Snuff Files, The Dead Files, Violations I & II, or even more recent titles like Murder Collection Volume 1. The second half is in turn a send-up of satanic panic style videos like Law Enforcement Guide to Satanic Cults, Devil Worship: The Rise Of Satanism, and countless others shat out during the 80s/90s.

The vignettes are hilariously inept to the point where it seems clear that Causey was parodying the shockumentary form; the ‘intestines’ stuffed into the mouth of the rotting corpse during the necromancy ritual, for instance, are clearly-visible sausage links, with no effort being made to disguise this (quite the opposite). Even the credits are a joke, mocking the seriousness with which shocku producers take themselves, crediting a ‘researcher’ for a film that clearly had none, and a ‘visual archivist’ being listed in place of a cameraman.

The scene-by-scene breakdown: guy being decapitated (the decapitated head then introduces the segments…and yet the same guy–Casey himself–mysteriously also appears in quite a few of the segments as well), removal of the brain, bovine/fowl abattoir, monkey surgery, guy slitting his wrists, guy shot in the head in a drive-by, chick being tortured with an iron and cigarettes before having her wrists slit, stomach surgery, easy ways to die: guns – drugs – war, cadaver examination, ‘interview with a ‘victim of satanic ritual’, ‘satanic crimes’, ‘satanic necrophiliac incest’, ‘death of a satanic hooker’, ‘interview with a satanist’, ‘necromancy: the art of talking to the dead’ ritual.