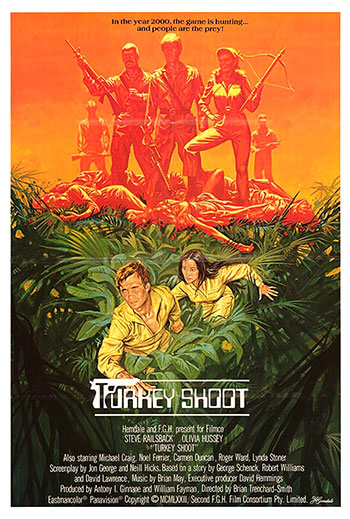 In the near future, after an unspecified holocaust, survivors are herded into prison camps. There, they are hunted for sport by the leaders of the camp. Paul, one of the newest prisoners, is determined not to go down as quietly as the others.

Set in the near future, the world is dominated by a strictly malevolent society that throws ‘social deviants’ who don’t conform with these rules into maximum-security behaviour modification camps. The latest arrivals to the camp warden Thatcher’s terror camp are the spirited fighter Paul Anders, the uneasy Chris Walters and the game Rita Daniels. Things are tough going and gruelling cruel, but they are given a chance of freedom. That’s if they take part in a survival hunt called the “Turkey Shoot”, where they would be released if they survive the twenty-four hours.

The Australian production “Turkey Shoot” was a complete hoot (or for some a shocker)! This unsparingly cheapjack action exploitation crossed horror / sci-fi fare only has one thing on mind – crass entertainment. Everything about it is on the fast track and there’s hardly any thought of letting up. Despite being a ultra-campy and sadistically violent variant of “The Most Dangerous Game” and George Orwell’s “1984” theme, the deranged premise is downright silly as they seem play it straight. There’s nothing really to work off it as it rather one-dimensional material. The cheekily black subject matter isn’t much of a satire (which from the original script sounded like it could’ve been), but its hokey dialogues, ghastly splatter and outrageously impulsive actions make this schlock highly watchable. Especially one worthy head explosion!