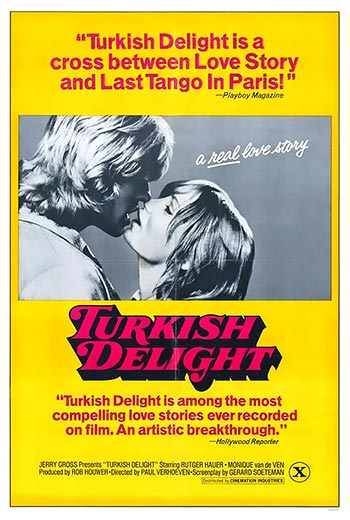 Although the confectionary does make an appearance at the end of the film, Turkish Delight, as a title, may be interpreted in a number of ways. This violent tale of love is told in flashback from the perspective of bohemian artist Eric Vonk (Rutger Hauer, collaborating for the first time with director Paul Verhoeven). When the film opens on a brutal attack and then a succession of one-night stands, it seems that the guy’s a complete jerk. Then a sudden lurch backwards two years reveals the motivations for both his dreams and behavior, as well as the subject of the photos he spends his time pining for. He meets Olga (a fantastic Monique van de Ven) as the result of a car accident. But their tempestuous relationship is shaken by many peculiar events: a surreal wedding ceremony, unveiling a statue to the Queen and the death of Olga’s father. The real problem is Olga herself, however, which leads to a shock ending many have compared to Love Story.

Somewhat dated now, and made long before his move to Hollywood, Turkish Delight is nonetheless unmistakably a product of the now-familiar Verhoeven style. The film’s language and images still have the power to shock or offend, and we certainly get to see far too much of Hauer’s private parts, even though some amazing visuals (mirrored candles, inspired beach art, and a nightmarish red Chinese restaurant) are some compensation.