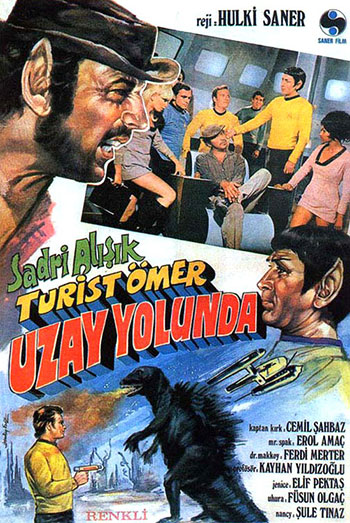 The viewer is treated to an outsider’s view of the Star Trek universe, as a Turkish slapstick comedian (Turist Ömer) escapes a shotgun wedding thanks to the timely intervention of the starship Enterprise. Borrowing shamelessly from several classic Star Trek episodes (particularly Star Trek’s first broadcast episode “The Man Trap”) an ability to speak Turkish is not necessary for Star Trek fans to be able to follow the plot, although it may well baffle non-Trekkies. In fact, picking out the various homages (and deciding which characters are being depicted by the actors) may well be one of the most enjoyable aspects.

Interspersed with the familiar scenes are more bizarre sequences, involving a mad scientist (a dead ringer for Alfred Ryder, who played Dr. Crater in “The Man Trap”), as well robots in loincloths, bikini-clad alien girls, and some of the most hilariously bad pre-digital special effects ever committed to film.