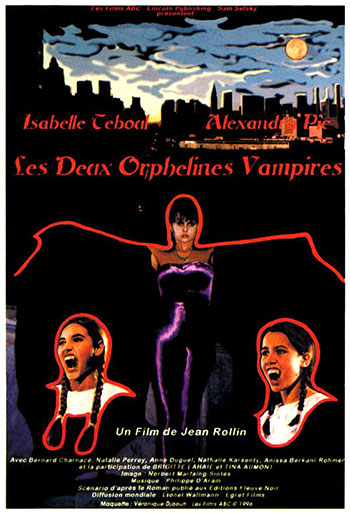 A pair of teenage girls, who are blind by day, but when the sun goes down, they roam the streets to quench their thirst for blood.

Rollin’s filmic obsession with vampires- and let’s face it, with erotic young women- has never looked this beautiful. Like many films to come out of Europe, this eschews huge action and movement in favour of stillness and thought. It’s beautiful to look at, and within the frame Rollin has trapped a whole other world- a vivid, colourful world of rich tones and contrasts, waif-like vampires and deep brown earth. Like some kind of comfortable dream on a hot Summer’s evening, ‘Two Orphan Vampires’ slides from plot point to plot point at its own leisure. At times there’s not a lot going on; but there’s always something to look at.

Perhaps the most astonishing thing about the film, is the way in which Rollin makes the tiny budget work to his advantage. We meet a vampire queen, a ghoul and a werewolf. But we are only *told* this is what they are- they appear outwardly ‘normal’… and although it’s a cliche to say ‘our imaginations do the rest’, here it is so true. Late in the film there is a scene in which one of the characters explains some of her past; stuff that Hollywood would salivate over. Rollin has her hunched over a table and s-l-o-w-l-y tracks the camera towards her. No fuss, no noise, no elaborately staged flash-backs and set-pieces. Stillness. Quiet. And an otherworldliness that will leave you changed. It’s like looking at a painting that illustrates a poem you strongly admire, and finding the artist has got it just ‘right’. ‘Two Orphan Vampires’ is a tribute to the enduring presence of Jean Rollin- a writer/director of integrity, vision and wit.