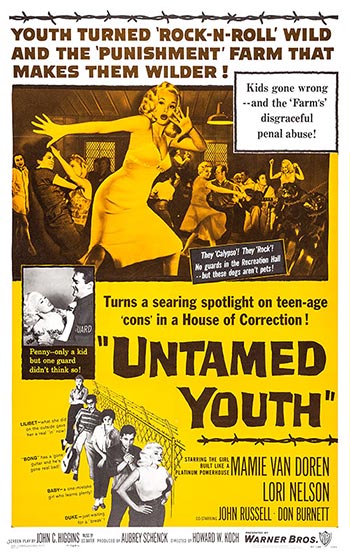 Sisters Jane and Penny are arrested for hitchhiking on their way to Los Angeles when they stop for a quick skinny-dip in a rural town. Local agricultural magnate Tropp is a sponsor for a local prison work program and the women get put in the cotton fields to work off their sentence. Tropp marries the middle-aged widowed judge in order to ensure a stable supply of cheap labor in order to undercut his competition. The prisoners suffer ill treatment, but the judge’s son has signed on as a hired hand and begins to figure out the scam as he begins falling in love with Jane, and Penny dreams of making it big in showbiz.

This cool bouncy fable with Mamie V. Doren & other good actors with good rock n’ roll songs and a PLOT blows away other “exploitation” films made under Warner Bros. (B-movie) department. Mamie doesn’t even hog screen time with her cool sister, played by Lori Nelson (the younger sister by one year), …great dancing by actors, great locale and set, cinematography, issues, sexy girls, corruption, cotton-pickin’, cops, black and white, an amusing cook named Pinky who spouts philosophy, clean towels and bad pay….Lurene Tuttle (from PSYCHO and MA BARKER’S KILLER BROOD) as a corrupt, in-love 50 yr.old with a clean-cut son who is a good guy, AND Mamie piping out 3 songs at appropriate times (while people rock n’ roll) with keeping her threads on and being sexier than ever AND INNOCENT OF ALL CHARGES.