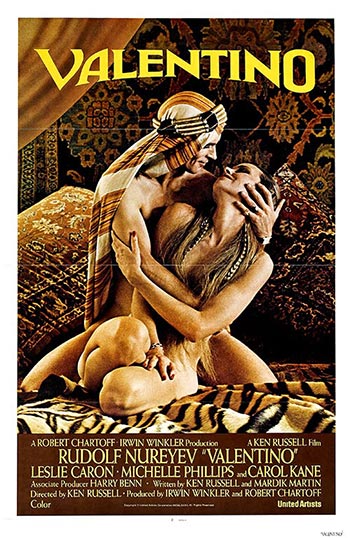 In 1926 the tragic and untimely death of a silent screen actor caused female moviegoers to riot in the streets and in some cases to commit suicide – that actor was Rudolph Valentino. Ballroom dancer Valentino manipulated his good looks and animal-like grace into a Hollywood career. His smouldering love making, tinged with a touch of masterful cruelty, expressed a sexuality which was at once both shocking and sensual.

As in all of his biography films Ken Russell takes no prisoners. A series of warped biographies on composers (Mahler, Tchaikovsky, List)incensed more than entertained audiences and critics. Laced with dark humor, vibrant costuming and Russell’s sardonic use of the composers works in conjunction with his colorful and outlandish compositions the films were visual feasts that bordered on character assassination.

In Valentino, Russell comes to America to offer his take on silent Hollywood and its biggest star of the era, Rudolph Valentino. Russell is relentless in his depiction of the exploitative and greedy nature of producers who in the opening scene stand over Valentino’s body lamenting financial loss. Russell also works over newspaper reporters, actresses, Valentino’s ex-wives and a comedian known as Fatty (Arbuckle?). Dancer, Rudolph Nureyev is no actor but as Valentino his poorly pronounced flatly emoted English fits and contributes to his sympathetic character.

As in all Russell films there are scenes that are lush and grandly staged (ably assisted by ex-wife, Shirley Russell’s original and over the top costuming) such as Leslie Caron’s entrance at the funeral home, the fight sequence where ball room dancing takes place in between rounds, the producer with the pet gorilla in his living room, and a cult fan gathering outside Valentino’s mansion.