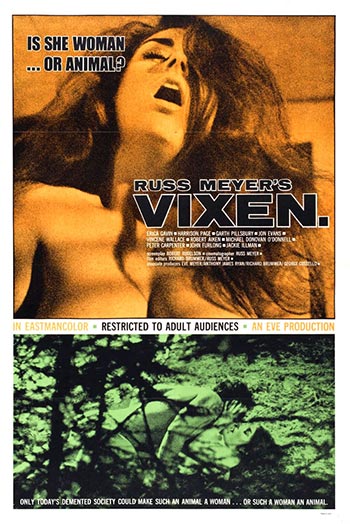 Vixen lives in a Canadian mountain resort with her naive pilot husband. While he’s away flying in tourists, she gets it on with practically everybody including a husband and his wife, and even her biker brother. She is openly racist, and she makes it clear that she won’t do the wild thing with her brother’s biker friend, who is black.

Russ Meyer’s VIXEN was one of the first films to receive the newly-formed MPAA’s X rating. There were stories that in some theatres, people would pay just to see the trailer for it then leave before the main feature(shades of THE PHANTOM MENACE!). As with Meyer’s other work, there is no way you can watch this and keep a straight face . . . nor should you want to.