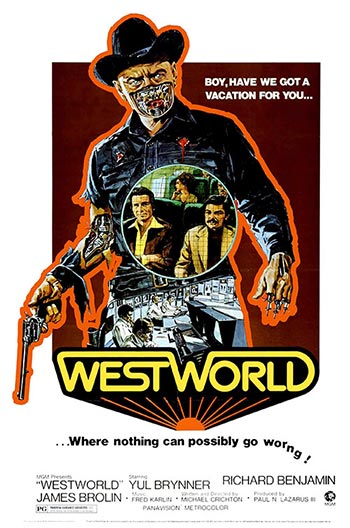 An amusement park for rich vacationers. The park provides its customers a way to live out their fantasies through the use of robots that provide anything they want. Two of the vacationers choose a wild west adventure. However, after a computer breakdown, they find that they are now being stalked by a rogue robot gun-slinger.

Westworld was the blueprint for what was later Jurassic Park. Here, Michael Crichton first envisoned Disneyland, if the Hall of presidents ran amuck. It provided many of the inspirations for later sci-fi films, like Terminator. It was a great blend of action, horror, and comedy.

Richard Benjamin and James Brolin are the heroes of the film, but Yul Brynner is the star. He portrays a robot, based on his character from “The Magnificent Seven.” Brynner is the relentless killing machine who fights until the end. With almost no dialogue, he conveys fear with little more than expression and body language.

The film explores old themes, the dark side of technology, but it was ahead of its time in depicting the dangers of computers and automated systems. The effects are dated, but the story holds up well. The sequel, Futureworld, tried to add political intrigue, with less success. Definitely one for the sci-fi fan or collector, or cult movie lover.