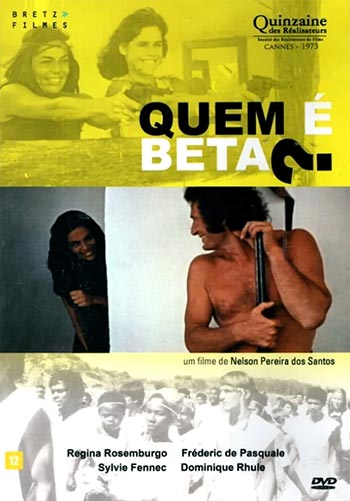 After a catastrophe that modified the world’s natural state and destroyed civilized society, a couple begins a new life in a shelter. Their relationship is disturbed by the arrival of a woman.

The critical success in France of How Tasty Was My Little Frenchman made possible dos Santos’ delirious science-fiction vision of free love in a post-apocalyptic wilderness besieged by flesh hungry zombies contaminated by an unnamed nuclear attack.

Who is Beta? follows two statuesque survivors drawn irresistibly together only to be entranced by the arrival and sudden disappearance of a third, the bewitching raven haired Beta. With its cartoon-like depiction of extreme violence and desire, Who is Beta? offers a heady Pop-infused companion to Hunger for Love. Yet beneath its giddy play of surfaces, dos Santos’ underappreciated film gradually reveals a darkly ambiguous metaphoric dimension.