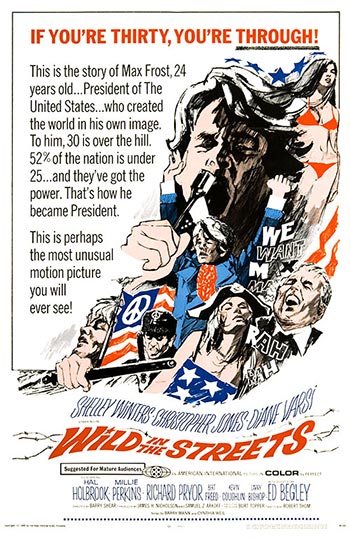 Archetypal 1960s musician Max Frost (Christopher Jones) lends his backing to a Senate candidate who wants to give 18-year-olds the right to vote, but he takes things a step further than expected. Inspired by their hero’s words, Max’s fans pressure their leaders into extending the vote to citizens as young as 14. Max and his followers capitalize on their might by bringing new issues to the fore, but, drunk on power, they soon take generational warfare to terrible extremes.

“Wild in the Streets” is aptly named since it is a very wild film, very unusual and original in premise. Christopher Jones, a James Dean lookalike, who sounds like Brando when he speaks, plays a charismatic rock singer in the late sixties.

When they lower the voting age to fourteen, he gets elected President of the U.S. and puts everyone over the age of thirty in LSD concentration camps. Shelly Winter provides one of her extremely over the top performances as his mother. You must see the scene where she is interviewed by Pamela Mason — it is a scream to watch and hilarious! Also, the soundtrack is wonderful and one of the songs “Shape of Things to Come” was on the hit parade and is a great rock tune.

The opening of the film literally jumps out at you, filmed during a rock concert featuring Chris/Max Frost and his band the Troopers (Diane Varsi, Richard Pryor, Kevin Coughlin) who all also give give good performances in the film. Highly recommended.