Without a Stitch (1968) Annelise Meineche 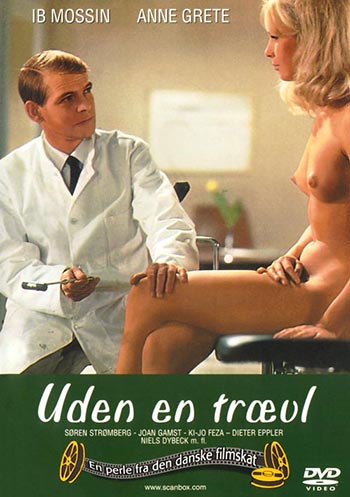 A young Scandinavian woman (Ana-Grete Nissen) is concerned that she is frigid, so she consults a young male doctor who prescribes a highly unorthodox and unprofessional (but pretty predictable) solution to her problem.

After his “hands-on” approach brings her some definite sexual satisfaction, he recommends that she continue her “explorations” by taking a long road trip where, naturally, she is to have sex with all, um, comers that she meets along the way.

This leads to straight sex scenes, lesbian sex scenes, three-way sex scenes, and at least one hilarious S-and-M sex scene. These sex scenes are ridiculously numerous, but they are also quite fast-paced, making this movie a little more exciting than most tedious softcore grinders. Like a lot of 70’s Swedish actresses, Nissen is quite appealing simply because she looks like a normal girl rather than the well-worn Times Square skanks you tend to find in a lot of American softcore films of that era (and she’s obviously more girl than silicone, unlike pretty much all the “adult” actresses of today).