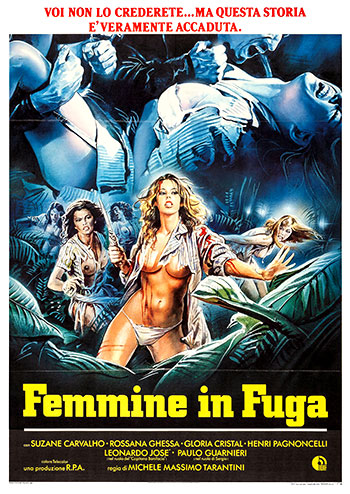 The young, pretty and shy Angela Duvall is jailed for murder in some Latin American country. In the prison she gets brutally “initiated” by the other inmates. The nice, honest and handsome prison doctor believe she’s innocent and tries to help her out.

This could be another film in a potential “Latin America WIP Film Festival”–other entries might include two other Brazilian WIP films “Amazon Jail” and “Bare Behind Bars” and the Argentinean film “Correcional de Mujeres” (strange that a continent that threw so many REAL innocent people in brutal prisons in this era wouldn’t have made a lot more of these films, but then maybe that was why).

Although it’s mostly Brazilian, this film was actually directed by an Italian director, Michele Massimo Tarantini. Tarantini is most famous for his laughable cannibal film “Massacre in Dinosaur Valley”, but his best films were probably the sex comedies he made with actresses like Gloria Guida back in Italy, as he he had little grasp on the dramatic structure. Ironically though, this one of the better Latin America WIP films because it actually has a plot (well, kind of), and a clear protagonist played by the very sexy Brazilian actress Susan Carvahlo (also in “Dinosaur Valley”). Carvahlo here plays a frequently naked and abused “new fish” who is actually genuinely innocent. As a crusading reporter/prison reformer rushes to her rescue, she and her fellow inmates stage a daring break out. The end is pretty stupid and frankly not nearly as cinematically compelling as the lesbian rape or firehose scenes in the first fifteen minutes.

Carvahlo to my knowledge only appeared in a couple international releases, but she was pretty appealing. She went on to become a successful race car diver! (And while some may she disagree, she probably looks a lot better naked than Jimmy Johnson). I actually don’t know that anybody (besides me) would be stupid enough to put together a “Latin American WIP Film Festival”, but, if so, this would be the top entry.