A Pistol for Ringo (1965) Duccio Tessari 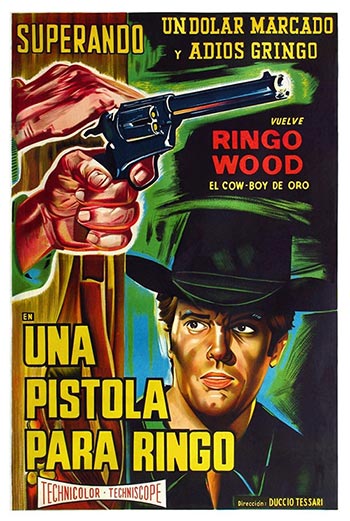 In a border town the famous gunslinger Ringo kills four people out of self defense but is arrested nevertheless. Meanwhile a gang of Mexicans cross the border and rob the local bank. Their leader is wounded when they try to escape and therefore the bandits take refuge on a nearby ranch, taking the occupants hostage. The sheriff is reluctant to take action because his fiancée is among the hostages. The only one who can help him now is Ringo, who is set free and asked to infiltrate the gang…

“A Gun For Ringo” is a lively movie created in the middle of a small revolution, the beginning of a successful European western wave, and the makers seem to have had a feeling “we’ve got our hands on something here!”, a certain excitement that hasn’t faded away. Great fun to watch, and both the youthful Giuliano Gemma (Ringo) and the charismatic Fernando Sancho (Sancho, leader of the bandits) went on to play similar roles in many movies of the following years.