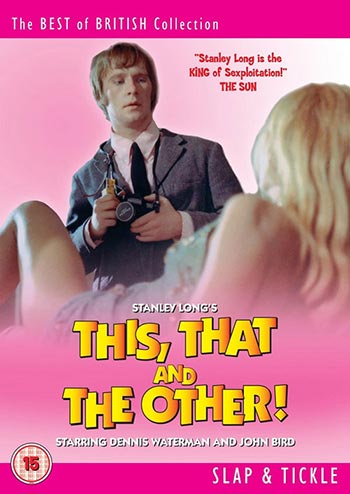 Three part ‘trilogy of comedy’. In ‘This’ Susan Stress, a fading sex symbol attempts to win the lead in a movie by seducing the son of a film producer only to make a fool of herself in a case of mistaken identity. In ‘That’ George is a depressed middle aged loner whose suicide attempt is interrupted by the arrival of a child-like hippy girl who proceeds to turn his life on its head. While in ‘The Other’ Harold, an avid sex film fan and taxi driver, crashes his cab after being distracted by the leggy charms of his latest passenger. Suffering a thump on the head, Harold has bizarre hallucinations and ends up being chased around a forest by shapely girls.